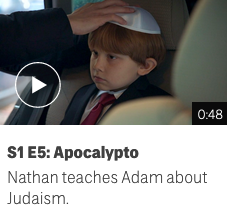 I’ve been troubled by the negative messages communicated about interfaith marriage in pop culture for a long time.

Back in 2003, the TV show “The O. C.” had an episode about “Chrismukkah,” a blending of Hanukkah and Christmas. I wrote “Chrismukkah” Is a Bad Idea, saying that “as the antithesis of maintaining special traditions, [Chrismukkah] only confuses children being raised with one religious identity in an interfaith family.”

A few years later, Jennifer Kaplan, a very talented filmmaker, made a documentary, Mixed Blessings, that featured four interfaith couples. I appeared with Jen and Marion Usher at a talkback after a showing of the film at the Washington DC JCC. My position was that the film did not show any happy Jewish outcomes, so the message was that interfaith marriage did not result in positive Jewish engagement.

This August, there were three problematic examples of negative messages in film, podcasts and TV.

The excellent Boston Jewish Film Festival included a new documentary, American Birthright, which I found to be very disturbing. Part of the movie is about filmmaker Becky Bordo’s journey of discovery of what being Jewish means to her. That part is fine. Anyone who wants to become observant in an Orthodox way, more power to them. 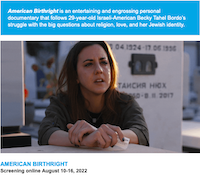 Becky’s journey is prompted by her sister marrying a partner from a different faith background, the first time that has happened in their family. That part of the movie, that trashes interfaith marriage, is not fine. While there are some contrary voices, the overwhelming message that comes through is that intermarriage is a “time bomb,” it threatens the survival of the Jewish people, one who intermarries “cuts the chain,” a Jew has to be separate, the children of intermarriage won’t be Jewish. One rabbi intimates that Becky’s sister really isn’t of a different religion than her fiancée, because of her lack of Jewish practice.

Another rabbi, who apparently is a renowned teacher of kabbalah and spirituality, says that “You can’t find your soul mate outside of your soul family” and that Becky’s sister “disconnected herself from a level of potential, that’s the truth of intermarriage.” How can a person who expresses such hateful views teach anything about spiritual practices and self-development? How is it different from saying that Black people are inferior or that LGBTQ practices are evil?

This promotion of hateful views about interfaith marriage is extremely disappointing. The messages turn interfaith couples away from Jewish engagement. That outweighs any value American Birthright has as an exploration of one person’s journey. I agree with 18Doors’ Molly Kazin Marshall, who is “sick” of how the film “perpetuates harmful stereotypes about interfaith marriage.” I’m disappointed that Jewish film festivals are choosing to include the film and that it is getting glowing reviews.

A recent episode of the Bonjour Chai podcast asked, Will Interfaith Marriages Save Judaism – Or Destroy It? Bonjour Chai is hosted by Avi Finegold, Ilana Zackon and David Sklar and is produced in part by the Canadian Jewish News. The episode was sparked by Sklar’s recent wedding to his husband, who is not Jewish; the wedding apparently was a wonderful celebration, officiated by Sklar’s Reform rabbi, Mark Glickman, in Calgary.

The hosts interview two Reform rabbis in Canada, Rabbi Lily Kowalski of Temple Emanu-El-Beth Sholom in Montreal, and Rabbi Philip Bregman, rabbi emeritus at Temple Sholom in Vancouver, to “tackle the big questions, including whether an interfaith wedding can be truly Jewish, how parents in interfaith relationships can instill Judaism in their children’s lives, and whether interfaith marriages might well spell the end of Judaism—or actually save us.”

Rabbi Kowalski’s part of the interview is fine, she expresses what I would describe as the current position of most Reform rabbis, who will officiate for weddings of interfaith couples on certain conditions, usually that the couple commit having a Jewish home and children.

But the part of the interview with Rabbi Bregman was outrageous. Rabbi Bregman was ordained in 1975, so he is probably in his mid-70s, and thankfully he says he only does occasional weddings these days. He opposes officiation at weddings of interfaith couples because the definition of a Jewish marriage is that it is between two Jews, and if it’s not a Jewish wedding, a rabbi has no role. Upwards of 80% of his colleagues disagree.

David Sklar asks politely but with evident frustration whether he thinks that saying no will push Jews away – they won’t feel part of Jewish communities if they’re not accepted with their partner; Rabbi Bregman’s answer is to talk about boundaries and say they are welcome to participate but subject to our rules. He even equates an interfaith couple asking a rabbi to officiate, to someone asking to bring non-kosher food into a synagogue.

The worst thing is Rabbi Bregman saying that when he did weddings, 90% of the children of intermarried couples, when they were around 25 years old, would not identify with any type of Judaism; pressed by Sklar whether that is a fact or an assumption, he says “absolutely.” That’s just not true, and it’s outdated; the 2020 Pew Report (pp. 43-44) says that 21% of children born before 1970 of one Jewish parent identified as Jewish, while an increasing percentage, 47% of those born between 1970 and 2000, do so. Or maybe the worst thing is Rabbi Bregman referring to “bastardizing” Jewish wedding traditions for your personal preference. And of course he’s “not into” children of intermarriage celebrating Christmas, Kwanzaa, etc., “we know what happens with that.”

This is really awful stuff. It’s one thing for Orthodox rabbis to trash interfaith marriage, as in American Birthright; but it’s tiresome and disappointing to hear Reform rabbis do the same, even older ones.

The hosts play a clip of Rabbi Glickman’s comments at Sklar’s wedding, and he got it right – he says the moment was foreordained from the time of creation, and is the kind of truly sacred moment that God wants to have.

After buzz in the Jewish press, I watched episode 5 of Nathan Fielder’s new HBO show, “The Rehearsal.” The premise of the show is kind of crazy – Fielder is rehearsing various situations that people deal with, in this case being married and raising children with actors he recruits, in this case his “wife” Angela and his five or six year old “son” Adam. In this episode, we see Angela supervising Adam reading something about Jesus; then Nathan gingerly asking first about exposing Adam to Jewish traditions, then about celebrating Hanukkah as well as Christmas. Angela is not receptive, at a critical point refusing to expose Adam to Judaism because “Judaism denies that Christ came and died for us. I can’t deny that. I wouldn’t raise a child to deny that. Because it’s the truth.” Nathan goes on secretly to take Adam to a synagogue and to a Hebrew tutor, who then confronts Angela, declaring her an anti-Semite. The episode ends with Angela leaving the show, and Nathan’s parents coming to celebrate Hanukkah with him and Adam.

Like I said, the entire premise of the show is crazy – not real. There are some underlying truths. One is that many young adult Jewish men who haven’t been very Jewishly engaged as adults find that it’s important to them to pass on Jewish traditions to a child. Another is that interfaith couples should talk about what’s important about religious traditions in their lives early on, certainly before getting married.

But what’s disturbing about the episode is the message that interfaith relationships are fraught with this kind of conflict. I completely disagree with the Forward’s Mira Fox, who says that the show gets “at some pretty cutting truths… the nearly unavoidable conflict in Christian-Jewish relationships.” Later Fox acknowledges that in real life, Angela would never marry someone who wasn’t a Christian.

In another great review of the episode, Hajdenberg says “The dynamic depicted in the show may not be a perfect example of a real-life situation.” That’s putting it very mildly.

JTA’s Jackie Hajdenberg interviewed the real-life cantor who plays the Hebrew tutor on the show, Miriam Eskenasy, who describes the reality of many interfaith relationships:

I would say more than half of the kids that I’ve worked with come from interfaith families. My grandson is half not-Jewish. [W]hat I’m finding out is that, most often than not, it’s the non-Jewish parent who makes the commitment to raise the Jewish child, and takes the kid to the bar mitzvah lessons, is invested in learning Hebrew, or asking questions about stuff or being interested — whether they convert or not.

You’d never guess watching the show that that is the reality – a reality I’d love to see depicted in pop culture.