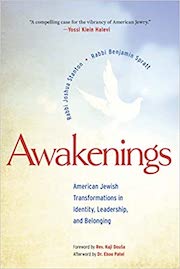 An important new book about the current state and future of American Judaism takes a positive approach to welcoming and engaging interfaith families – but doesn’t grapple with the fundamental challenging issues involved in including partners from different faith backgrounds.

In Awakenings: American Jewish Transformations in Identity, Leadership, and Belonging, Rabbis Joshua Stanton and Benjamin Spratt challenge the narrative of decline of Jewish life in America, seeing instead many signs of growth in spiritual practice, Jewish learning and community building. They issue a call to action that will enable Judaism to “bloom as a wisdom tradition, accessible to all, providing tools to meet the deepest needs of today.”

Stanton and Spratt are critical of the rhetoric of “continuity crisis which prioritizes endogamy over partnering for love and ignores the far more complicated question of how we can enable more people to find meaning in Jewish ritual, ideas, community, or experience.” They say (p. 23) “it is long overdue to view [exogamy] as the literal embrace of American Jews” and that intermarriage “opens up remarkable opportunities for demographic growth and social influence.” (At one unfortunately edited point (pp. 47-8), the authors say that “rising rates of intermarriage … tell the story of decline,” followed many lines later with “The American Diaspora may be better off nonetheless.” It’s clear from the book as a whole that the authors do not view intermarriage as a sign of decline.)

Throughout the book, Stanton and Spratt use various formulations like “people who are Jewishly connected,” “Jew-ish and Jew-adjacent people,” “people who are not Jewish but are entwined in Jewish life,” “people connected through family or friendship to Jews.” I would have liked to see more explicit references to “interfaith couples,” “interfaith families,” and in particular to the partners of Jews who are from different faith backgrounds. (At one point (p. 97) the authors seem to go out of their way not to refer to partners in interfaith relationships: “[O]ur communal institutions should do even more to reach out to and care for those who do not have two Jewish parents, who are not Ashkenazic, who are not straight, and are not partnered.”)

Nevertheless, the authors speak about “fellow travelers” (another formulation) in incredibly positive ways. I greatly appreciated their recognition of the distinction between being Jewish and doing Jewish: “We should even look beyond people who identify themselves as Jews for life. Much as we should continue honoring membership in a people, we should also acknowledge how people can be Jewish, do Jewish, and experience Jewish in more ephemeral ways.” (p. 97) “Our focus should be on doing Jewish, not simply being Jewish in a passive way that prioritizes ancestry over action.” (p. 124) They even suggest that as more and more people engage with Torah,

“the more Torah itself will grow… Our fellow travelers will come to guide our path and ask questions that biological Jews might never have inquired about – and come to define our diasporic approaches. Those on this edge of Jewish life are already awakening us all to what might be possible and demonstrating the extent to which our ‘core’ so often fails to meet our needs.” (p. 118)

Stanton and Spratt clearly understand the need for welcoming and inclusion: “The Ashkenazic, heteronormative, nuclear-family-centered, static assumptions of Jewish communal life may inadvertently hurt people who don’t fit neatly into those categories when they seek to engage with communities and organizations whose implicit assumptions exclude them. As a result, they may feel marginalized.” (p. 96) But they gloss over the distinction between welcoming, where one’s presence as a guest is appreciated, and inclusion, where one feels that they belong. For example, referring to the “larger story” of the Covid pandemic, they say “It is about total inclusivity, the welcoming of people irrespective of background, identity, or how they engage Jewishly.” (p. 73)

The authors refer to the importance of belonging and inclusion many times:

The authors also touch upon the challenging issues involved in inclusion: “Many of our institutions remain outdated in their notions of belonging, wasting precious energy on questions such as whether Jewish clergy should bless an interfaith wedding, rather than actively embracing people who seek Jewish learning and spiritual practices.” (p. 96) But they don’t come to grips with the need to adapt attitudes and policies in order to consider and treat partners from different faith backgrounds as equals to their Jewish partners, which I argue is essential for them to feel that they belong.

At times it seems that the authors believe that conversion is required for a partner from a different faith background to be included. After referring to Lydia Kukoff and Rabbi Alexander Schindler bringing the concept of choosing Judaism to the mainstream nearly fifty years ago (p. 23), they say “Our institutions are reaching out and embracing the possibility of demographic growth.” Do they mean to say that demographic growth is only possible with conversion? Referring to the 2020 Pew report, they note that there may be one million people who have converted, then say (p. 49) “Their involvements, interests, and conceptualizations of Jewish life may well constitute the future of the American Diaspora.” Do they mean that the involvements and interests of unconverted partners will not?  When they talk (p. 99) about “welcoming many more people who seek to forever entwine their lives with the Jewish people, the Jewish community, and ways of life inspired by Jewish tradition” – does “forever entwining” require conversion, or not?

I don’t believe they think it does. The authors are critical of promoting conversion: “We demand that newcomers proclaim their loyalty to the Jewish people before they understand what either “Jewish” or “people” might really mean to them or have the chance to explore Judaism without pressure or expectation.” (p. 135) Moreover, requiring conversion for inclusion would be inconsistent with the authors’ conclusions: “If our purpose is to inspire Jewish life and people to embrace Jewish wisdom anew, whether or not they seek permanent membership in our people… We must prioritize finding the purposes that unite people in doing Jewish and in encountering Judaism as a verb rather than a noun.” (p .120-21) “Realizing the full potential of this pivotal time … will push us to move beyond a singular focus on peoplehood…” (p. 134) I would have liked to see a clear statement to the effect that conversion is a wonderful personal choice, but should not be required for inclusion.