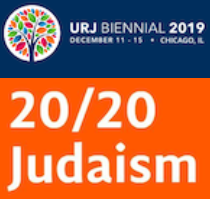 [Portions of this essay appeared in eJewishPhilanthropy on February 4, 2020 under the title “Reconceptualizing Conversion.”]

Conflicting views about conversion were at the core of what was said – and not said – about interfaith inclusion at the recent biennial conventions of the Conservative and Reform movements.

With 84% of new households that include non-Orthodox Jews being interfaith, it clearly is essential to engage more of those couples if any liberal Jewish activity is to thrive in the future. Experts agree that people engage with a group if they feel included – that they belong. But many Jews think that if partners from different faith backgrounds want to belong, they can and should convert.

Holding up conversion as a condition to inclusion – a persistent view expressed at the biennials – is a bad strategy that will push more couples away at the outset. Instead, we should see conversion “for the right reasons, and at the right time” as an incidental possible future outcome of an approach of full inclusion without condition that will bring more couples in.

That interfaith inclusion was more of a focus at the United Synagogue/Rabbinical Assembly gathering represents a sea change. In the past when I would try to interest Conservative rabbis in InterfaithFamily’s work, most were standoffish because of our position on conversion: when I said it was a wonderful personal choice but if promoted too aggressively would turn people away, the typical reaction was “not good enough.”

With membership declining, attributed by most to the movement’s less than welcoming response to interfaith families, attitudes are changing. Over the past two years, the United Synagogue partnered with InterfaithFamily on a survey about welcoming interfaith families in Conservative synagogues, the subject of a well-attended biennial session.

The most striking development occurred when Rabbi Wes Gardenswartz delivered a passionate statement that Conservative rabbis should be permitted to officiate at weddings of interfaith couples who intend to raise their children Jewish. Rabbi Eliot Cosgrove advocated in response for standing by the sociological and halachic value of inmarriage, and positioning the Conservative movement as the movement of conversion. Acknowledging that many might not convert, he said it is not the movement’s responsibility to serve everyone or to risk standing for nothing.

Rabbi Gardenswartz had this to say about conversion:

It would be great if Christopher [the hypothetical partner of Rachel] would convert.  Conversion would clearly be our preferred option. We would move heaven and earth to encourage him to convert if he were open to it.  But here is what he says…. I love Rachel for who she is.  I want to be loved for who I am.  Maybe in time I might choose to convert, but I want to do it for the right reasons, and in the right time.  The right reason is that this is something that I want to do, that I am drawn to.   The right time is when I feel ready.  I don’t want to do it to make her parents happy, or to make clergy happy, or as a condition to a wedding.  I am happy if our children are raised Jewish.  I would be partners with Rachel in their getting a Jewish education. But I am not ready to convert to Judaism unless I feel it is something I want to do because it feels right to me.

Half of the room enthusiastically applauded after each rabbi spoke, reflecting the movement’s sharp division. Rabbi Gardenswartz noted one outcome of saying no is couples might go to “the fabulous Reform rabbi, of the thriving Reform synagogue, the next town over.” But the situation wasn’t so rosy at the URJ Biennial.

Out of more than 100 learning sessions, only four were focused on interfaith families. At one, I presented the results of a survey the Center for Radically Inclusive Judaism (CFRIJ) conducted of interfaith inclusion policies and practices at Reform synagogues. One key takeaway was that leadership positions continue to be largely restricted to Jews; in only 43% of congregations can partners from different faith traditions serve as board members, and in only 21% as officers. Second, while ritual participation has opened up, with 70% of congregations allowing parents from different faith traditions to have or join in an Aliyah at the b’nai mitzvah of their children, it is not clear how many congregations allow partners from a different faith tradition to recite the words of the Torah blessings. Many congregational leaders clearly view conversion as a requirement for full inclusion in leadership and ritual.

Shortly before the Biennial, CFRIJ announced a grass-roots campaign to have Reform congregations propose a resolution at the 2021 URJ Biennial calling for full inclusion of interfaith families and partners from different faith traditions. One rabbi strongly objected, saying that if partners from different faith traditions can do everything Jews can do, Jewish identity would be meaningless and no one would convert, and that it’s like citizenship, where aliens have certain rights but can’t vote.

As I said at the learning session, addressing what inclusion means, maintaining high boundaries and applying the citizenship analogy – essentially, requiring conversion as a condition to full inclusion – is a recipe for decline. At another biennial session, on supporting “Jewish adjacent” members, two partners from different faith traditions detailed their extensive Jewish engagement in both their families’ lives and in their synagogues. Questions from the audience commented that they were more Jewishly engaged than many Jews, and wondered how they felt about conversion. Both indicated that for their very personal reasons, it wasn’t the right time, but it might be in the future.

The most striking development was Rabbi Rick Jacobs’ speech, As Numerous as the Stars of Heaven. After stating that “Jewish life was meant to expand and grow” and urging the Reform movement to enlarge the size of its tent, the speech focused almost entirely on embracing Jews of Color, and ended with a call to action to address antiracism. I am all in favor of embracing Jews of Color, but the impact of doing so is dwarfed by the potential numerical gain available from embracing partners from different faith traditions.

Rabbi Jacobs did make a passing reference to “so many people out there who are Jewishly adjacent… and they are part of this family of ours.” But instead of saying “There are millions of North American Jews … looking for a place to belong,” I wish Rabbi Jacobs had referred to millions of “North American Jews and their partners from different faith backgrounds.” When he said, “It is time that we make every person who comes under our tent feel like they already belong,” I wish he had said “that means partners from different faith backgrounds, too.”

The leaders of liberal Judaism are missing opportunities to explicitly prioritize engaging interfaith families, the defining challenge of our time. Another takeaway from the survey was that congregations do not talk effectively about their interfaith inclusion policies and practices either among their leadership or with their congregants, with only 18% publishing them on their websites.  We need to rise above the lingering ambivalence that conditions inclusion on conversion and instead embrace full inclusion as our goal.